...wouldn't have been as much fun.

Usually, when the weathermen are forecasting below zero temperatures I make sure I've got a least a quarter tank sitting in my tank. This weekend, when the predictions were for lots of snow I didn't even think about my gas. It was pretty much on empty, but I wasn't heading anywhere so I decided to wait until the next trip out: Sunday morning Church.

We woke up on Sunday to ice covered streets. With the forecast of sleet turning to snow, we decided not to go to church. No where to go, no trip to the gas station, no worries.

This morning, since my van was in the back, Matt had to move it before he could get his van out to go to work. Shortly after we all kissed him good-bye he came back banging on the door. "Everybody get your boots on, I'm stuck, you gotta push me out."

Dressed in our 6:30 AM best, we donned our boots, jackets, hats and mittens, grabbed shovels and headed to the street. Just as another stranded motorist was gravitating our way to help, Matt's car found traction and was off. Before he said his final farewell he mentioned my van was on "E" and he thought it would take quite a bit of time to melt the ice off...IF I decide to go anywhere. What he really meant was...I don't know what you're going to do, there's not enough gas in there to let it run with the heater on until the ice melts.

Since we were already out and dressed we pushed the other stranded neighbor out of his dilemma and proceeded into the house for breakfast.

I had thought of retrieving and setting up the new bus heater, running an extension cord to the van and let it heat up that way. But the whole van was literally encased in a quarter of an inch of ice (with the exception of a little crack around the door from when Matt opened it) so there was no way that would work. Any heat created would have quickly escaped through the open door.

I lit a jar candle and placed it on the dashboard. Every 15 minutes I went to check on it, after an hour and a half , and some nasty whacks with the ice scraper, the windshield was warming enough to be able to chop a hole, get under and peel the ice away like a scab. My plan was to just do enough to drive safely to the gas station, fill up and then let it idle to melt the rest. 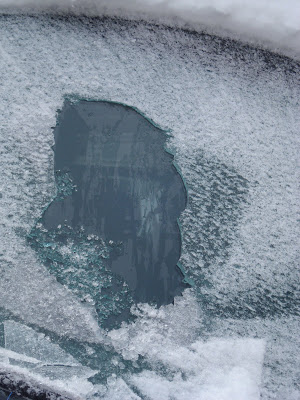 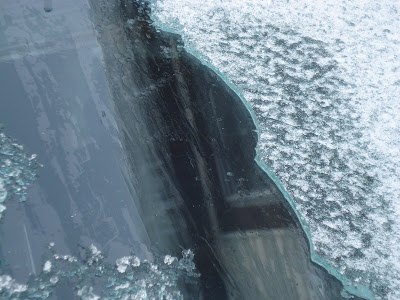 That took awhile, but it was fun.

I gotta get out more.
Penned by Kari approximately 12:58 PM
Email ThisBlogThis!Share to TwitterShare to FacebookShare to Pinterest
Labels: whatnot

Hmm...I think I just would have stayed in for the day.

It does seem somewhat anachronistic to use something as low-tech as a candle to heat a windshield.

Thanks for stopping by my blog! Can't wait to read about the bus adventures...

the mind is tool you need to keep using, you keep using yours, you go girl

oh ya and I think of Little House on the Prairie when I read that. They may not have had car windows to thaw, but hey back then, warm boddies around something that tiny to warm around if the fire went out at night.

In highschool, all we had was a wood burning stove and if we didn't stoke it up, it was brutal getting dressed!!