Pimp My Ride - The Investigator 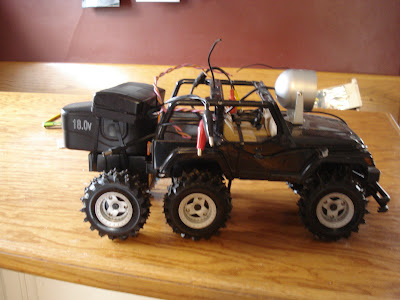 We used to have Dish Network, I've seen the show. I know the modifications that have been made to the Investigator are not quite the kind that they do on that show, but I've been hoping to increase traffic on my site.

I have this thing called "stat counter" that analyzes data from my visitors. It records things like "recent keyword activity", "recent came from", "visitor length", "returning visitors" and the like. It's very fun to see where you all come from. Although, if you don't have cookies enabled (I'm still trying to wrap by brain around that one) I can know nothing of your whereabouts or if you stop by more than once. (Especially since only a few leave comments - shameless attempt to increase comments as well) The tab I find myself clicking on the most is "keyword analysis". It tells me if someone got to my site as a response to their search. There are a lot of queries pertaining to this post, mostly foreign, I wonder if those initials actually say something in a foreign language?

The most popular search terms refer to "school bus salvage yards" or "swivel mechanisms" or "astro van seats" and the like. But my favorite so far has been the poor individual who googled "Resident Evil" and visited this post. I wonder if that was what he was expecting?

Anyway, back to The Investigator. Did I mention that it eats batteries? 9 volts, the kind that they don't make rechargeable. It's missions were becoming expensive so Turbo MacPowerson (aka Matt) pimped it a little to reduce the cost.


He modified a rechargeable battery pack from a cordless screwdriver and installed it the the back. It's only downfall so far has been it's weight, it gets stuck alot. I'm sure Matgyvr (aka Matt) will have a solution to that sometime in the near future. But in the mean time I'll leave you with this:

The first ever recorded mission of the new and improved Investigator...In which it fulfills the purpose for which it was designed.


We're still trying to get a better quality video onto YouTube so it's not so choppy.
Penned by Kari approximately 11:49 AM
Email ThisBlogThis!Share to TwitterShare to FacebookShare to Pinterest

I showed Jeremy this one. We think your family fun is pretty great!
Anna

Still not able to see them (I think videos) but did get I think the active x to work.

Oh, I am positve they make 9volt rechargable. I have NOT seen them but I have heard!