Getting ready to GO!

The kids and I spent last week at Lifest. 5 days of great music, speakers, activities, comedy, fun, food and faith. Being a little tired, and not being able to think of a suitable description, that last sentence was copied straight from the website.

It was really truly amazing. I'll try to do the experience justice.

In the process of preparing for the event last week in the hot humid weather I was skeptical of my sanity. What am I doing? Why am I going camping in the tent, alone with 5 kids, with no electricity, no water? Who do I think I am? Even though Matt was joining us Friday after work, I don't have fond memories of tent camping without him.

"This is the LAST time I'm doing this! You people aren't even helping me!" I sobbed more than once in the 87 degree temperatures as I hauled all the camping gear from the basement, packed and brushed the pine needles off the little trailer that had been parked in the back since our last camping trip in September. The one that convinced Matt of our need for a bus. "If only the bus was ready"...played over and over in my mind.

Somewhere between a family reunion requiring and overnight stay, 4 soccer games, 4th of July celebrations, painting the cupboard doors for the bus, countless trips to the store for food and supplies and Matt being on call (and working) for a huge part of the 6 days prior to departure I realized how much Satan didn't want me to go. I realized how much he wanted me to throw in the towel and give up. Then and only then did I give it to God... Foolishly, as I do so often, I wait until I can't do anymore it before I give it to God. How stupid! Maybe someday I'll learn.

Wednesday arrived cooler and with a breeze. We arrived and set up camp without incident. The kids worked together wonderfully at the plan we had devised. 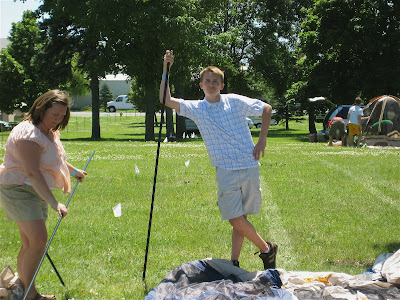 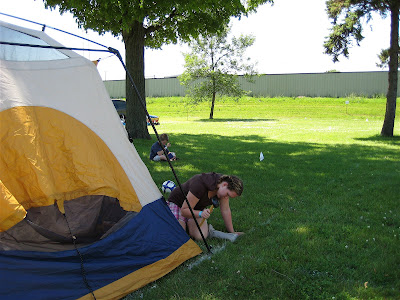 One for the tent and trailer... 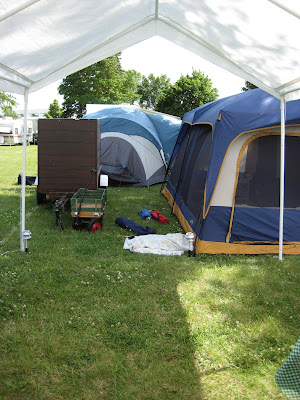 One for the carport that we borrowed from a friend... 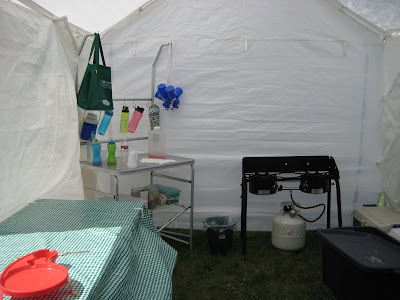 And one for the van. It was parked right behind this end of the carport. That detail becomes important later in the story.

With their cell phones fully charged, I cut the older 2 loose! Me and the younger 3 set out together to check out the bathrooms and see what we could see.

We met a wonderful couple just down the "road" with this cool set-up. We stopped many times to visit with Ann and Erik from Chicago. Their shelter is an actual refugee hut made with pvc pipes and tarps. Very cool. 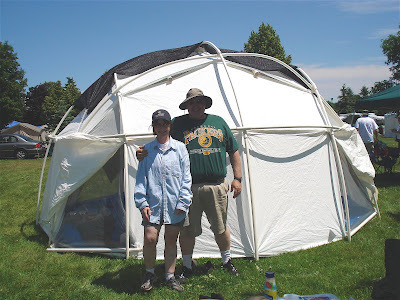 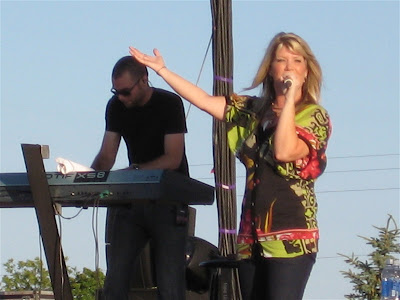 And had their picture taken with Bob Lenz, founder and president of Life! Promotions. 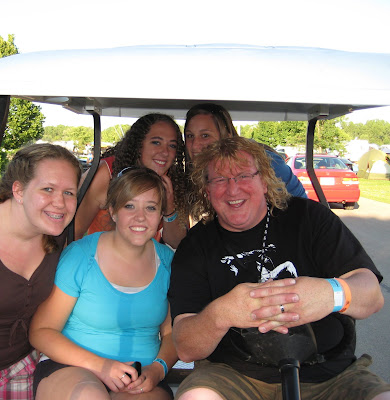 Hayden found the dodge ball tents and whacked a few kids that were not his brothers. Novel, I know. 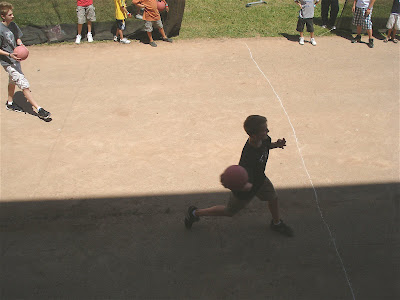 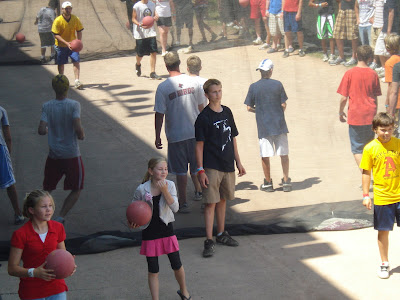 The boys and I staked out our seats at the Grandstand for the Newsboys. Griffin's all time, favorite band in the whole wide world! He knows all the words to every single song they sing. He was just about as excited as I was. I happen to really, really like them too. 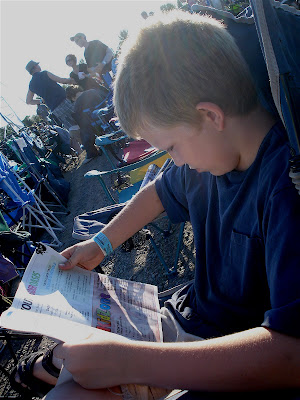 I don't really know why I stressed out so much about packing activities for Sam and Isaac...They played with 2 "guys" and rocks all the time we were there. 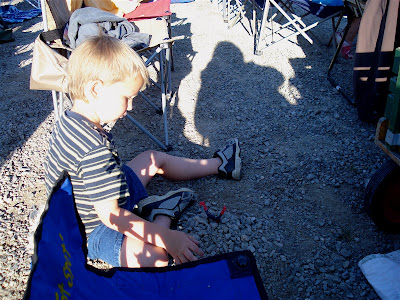 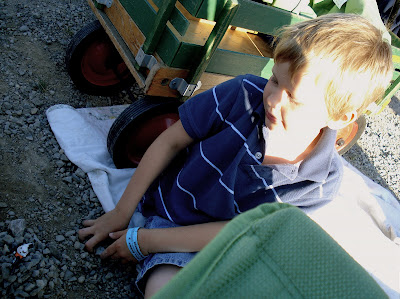 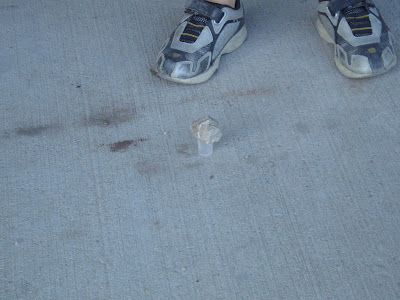 It had been a long day and the little boys were tired. I promised them I'd wake them when the concert started. 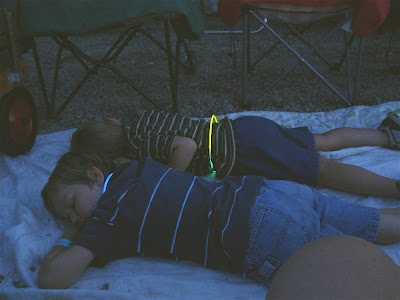 Of all the concerts I've ever attended in my life, I'd have to say Newsboys has been my favorite. 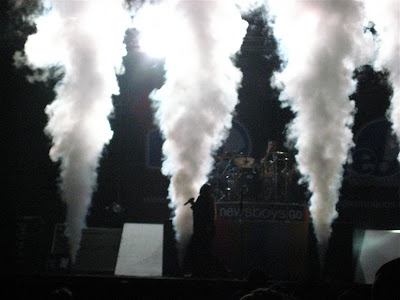 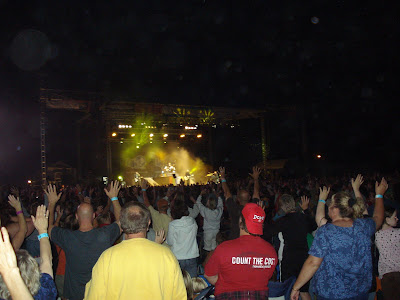 Or it could be the drum off...

(I don't think legally I can post the movies the big kids took of the drum off, check out the Newsboys website (or here) for videos, or come over, I'll show you ours!)

Or it could be seeing my boys praising God with their whole beings... 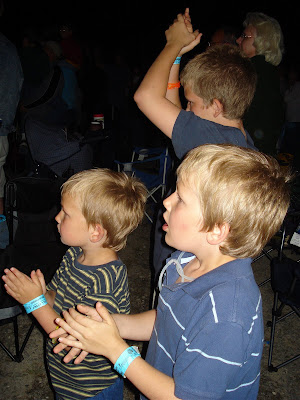 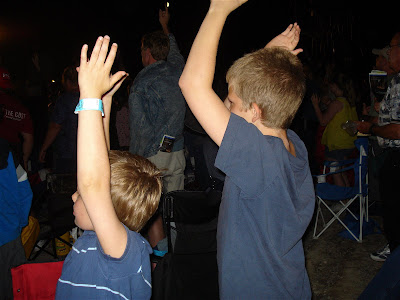 Or it could be the fun of "Breakfast" and knowing the big kids were close enough for Hayden to scoop up a handful of Cap'n Crunch and for Hailey to bring some home in bedded in her shoe. 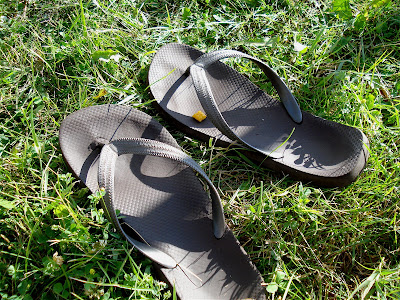 If you've seen them, you'll know just what I'm talking about. If you haven't, you really are missing out.

Upon arriving back at our campsite we came to the conclusion that we, in the first 6 hours of the festival, had gotten our money's worth. All the rest was going to be bonus.

More tomorrow, now I must shower and take a nap...

God is good
(All the time)
All the time
(God is good)
-Peder Eide
(Lifest 2008 M.C.)
Penned by Kari approximately 4:49 PM
Email ThisBlogThis!Share to TwitterShare to FacebookShare to Pinterest
Labels: kids, whatnot

I am so jealous. I REALLY could have used that "relief". I also love the newsboys. Thanks for sharing, I look forward to hearing about the rest of the "fest".
Happy day.