To Orlando And Beyond... 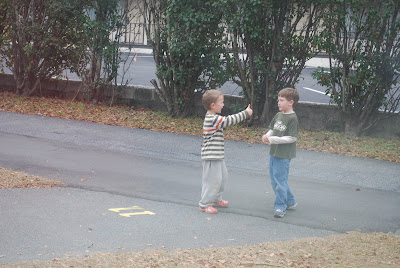 Jim from the RV park and I had talked several times before we actually met. Our travel arrangements were odd he agreed, but yes, he could fit us all in one site. "I'll have to charge you for all those extra people though." That was the deal. Oh, and if we were going to arrive after 6:30pm to just give him a call and he'd tell us our site number. We could settle up on Sunday morning if I could just stop by the office before he left for church.

He didn't charge us for everyone though, "I'll just pretend you have 7."

We showered, played outside, ate hot food and shopped. I had heard that once you cross the state line into Florida all the prices increase. We found Wal Mart and Sam's Club (Lola, Kris's navigation system, was no help. This was strike 1 for Lola...) and stocked up on food for the week in Orlando. We left the RV park very close to 3pm. No sight of Jim with a sniper rifle.

I had planned on using this time (with internet at the campground) to get specific directions to the Wal-Mart in Orlando where we would be boondocking but I forgot. The plan was to get as close to Disney on Sunday as possible. Our reservations at Fort Wilderness Campground were for Monday and we wanted to arrive as early as possible.

For those of you unfamiliar with the term "boondocking", let me explain... Boondocking, or dry camping, is nothing new, usually used in reference to camping in out of the way places or off the beaten path. Recently, it has taken on a new meaning for RVers. Sam Walton was rumored to be an avid camper and family man and often encouraged RVer's to use his lots for overnight stops. Marketing brilliance on his part. Happy campers spend money in the store...Since his death policies have changed for Wal-Mart and not all of them allow parking overnight. Some due to city ordinances, some just because they don't want the hassle.

Every year there are rumors that it will no longer be legal but every year RVers boondock without incident. Mostly, campgrounds and RV parks spread these untruths because they fear the loss of business. There are also a certain set of unwritten rules to be followed, much like salvage yard etiquette.

There are lists of "no parking" Wal-Marts and lists of ones who happily welcome them freely on the web. I had printed off the "no parking" Wal mart list just in case we needed it but was going to nail down a specific location from Georgia. ( I ran out of planning steam and time before we left home!) I knew my mom had a copy so I called her (She was already in Disney with my brother and his family) and got a few addresses.

Strike 2 for Lola occurred on Highway 4 in Orlando when her directions were unclear and Kris's car and our bus got separated. Our walkie talkies were not within range and I didn't have Kris's cell phone number, but she had ours, so we drove around looking for the Wal-Mart on our own. (Orlando is really a hoppin' place, even at 8:30 on a Sunday night!) "We" stopped and asked directions at a gas station. (Who went in to ask? I'll give you one guess) and found that we were not far off track.

Enroute I got a call from Kris, Lola had redeemed herself and led my sister to the proper place. Even though it was not listed on the restricted list it had "No Overnight Parking" signs all over the lot. I didn't tell Matt yet, he was in no mood to deal with that little tidbit. I thought we should get there first and talk about it later.

No more than 2 minutes after we arrived in the lot next to Kris's car a security vehicle pulled up along side of us. My window was open and I called out to her that we would not be staying here. I received a blank stare...maybe she couldn't tell my window was open...I said it again. Nothing. Matt waved at her, she rolled her eyes and drove away.

Tension was rising, we were tired and no one was used to lapses in my planning. Up to this point, EVERYTHING was planned out. Where we would stay...what we would eat... and it had all worked out. I don't think quickly on my feet (except sometimes) so in order for me to feel secure, I like to have a plan. This particular Wal-Mart was located in a mini mall and there were RVs and a few semi's parked in the out lot. We nestled into a spot between Denny's and McDonalds among the other drivers and just to be sure, I went into Denny's and asked the manager about the parking situation. He told me "They'll kick your butt out of their lot, but you can park in mine." I wanted to hug him and told him as much.

We put the bus into sleep mode and settled in for the night. At 2 am I was awakened by a strange sound and looked out the window just in time to see all the lights in the entire block go out. Very creepy. Very Dark. Sirens in the distance. Alarms in the stores. Very tired. Very sleepy...

There were a few white knuckle moments while driving down but all in all, it was a pleasant and easy trip. The bus tended to "lean" to the right, so I constantly felt like I was fighting to stay in my lane. This wasn't a problem for most of the trip, but when we hit construction...in the rain... with 12 inches between the bus and the barrier... and semi's passing on the left...I felt like I could cry.

Matt didn't seem to have a problem keeping the speed consistent but I did. I think maybe it was the position of my foot on the peddle. I got better as the miles wore on but my leg ached from the constant pressure.

Trip South Totals:
1475 Miles
32.5 hours (including potty stops and breaks but not sleeping time)
Penned by Kari approximately 6:00 AM
Email ThisBlogThis!Share to TwitterShare to FacebookShare to Pinterest
Labels: Bus