That's the cry here at our house.

Last load of laundry. Last sweep of the house for useful travel items. Last look at snow for a week and a half. Last cuddle from the kitties. Last call for bus tweaks.

We've done a lot to the bus in the last few weeks that I haven't chronicled. We'll have lots of pictures of us on the bus as we wend our way south, so I'll mention them as we go.

On a side note, Griffin got a nasty sliver two weeks ago. I thought he was being a little over dramatic as he writhed in pain while I was tending to his foot. (But there was still that small voice that told me there might be something more to it...Momsenses?) 2 days later we we're pleased when a puss bubble caused a small sliver to come out. Thinking that was the end of it, because I could see absolutely nothing more, we moved on with our lives. He stopped complaining and I stopped checking his foot each day for signs of infection.

Today, as he finished his last shower, he called me in to see what was under his band aid. This is what was still in there. It must have been straight in. YUCK 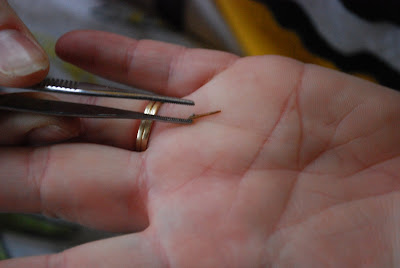 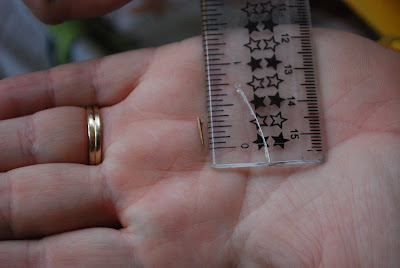 We saved it in a baggie for Matt to see when he gets home. Wouldn't you?
Penned by Kari approximately 9:02 AM
Email ThisBlogThis!Share to TwitterShare to FacebookShare to Pinterest
Labels: Bus, kids

The sliver rocks! Jeremy's got him beat... he got a two inch long sliver from the mantel of the fireplace in Curly's Pub (lambeau feild)... had to go to the hospital to get it out!
I LOVE THE MICKEY MOUSE EARS! THEY ARE SO CUTE. YOU MADE ME SMILE TODAY! I pray you are safe and having a nice time on your travels.