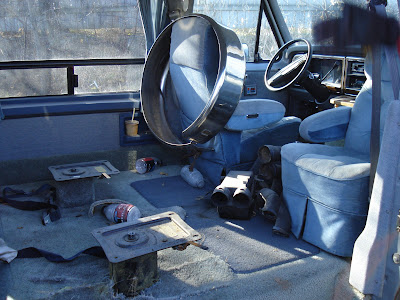 Well, here we are back at the salvage yard. Here are those drasted swivel mechanisms. They're stuck, no amount of elbow grease will make them give up their position.

"Ya know" Matt says to me, "Fleet farm has them for $30.00 a piece." "Really" I say not wanting to give up hope for cheap ( I mean recycled) parts , "Let's look around some more." I've got the bug. This is my Black Friday without the crowds. The van did not prove to be so stingy with its overhead lights though, we are able to muscle 3 sets away from her. 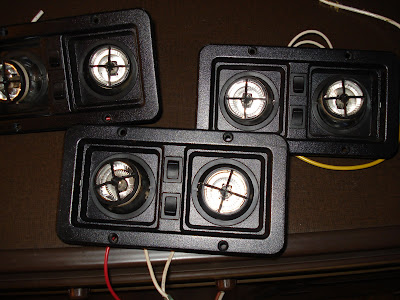 While I am new to this whole scene, Matt has been doing this for years. BUT he's never looked through conversion vans and campers before, it's a whole 'nother world. He's area of expertise is FAST stuff. You know, under the hood stuff, engines, transmissions, turbo chargers and intercoolers. It turns out as we wander to the camper van to check out the "kitchen" again, we come upon another gaggle of conversion vans. All with swivel seats. Apparently, these are widely available.

The refrigerator is small but in great shape and runs on 12/120 volt and propane. Under the counter top are 2 burners and a sink. After 2 weeks of pondering (and pricing new) we think it's worth taking. The owners manual and operating instructions are even in the glove box. I'm big on owners manuals and instruction books. 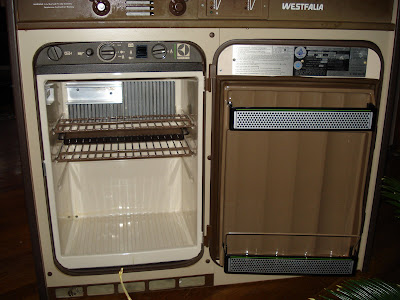 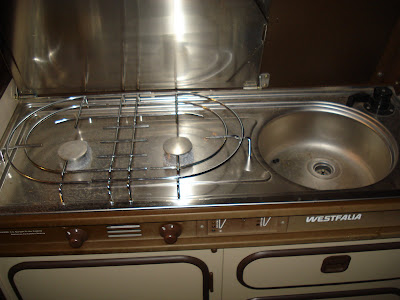 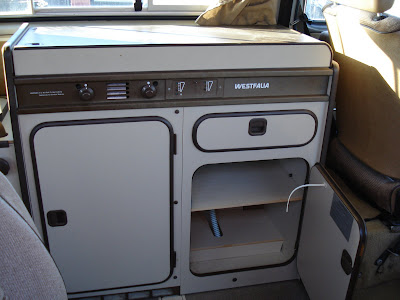 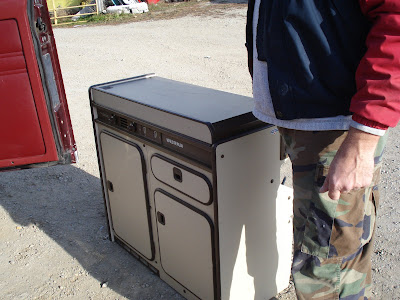 After we lug the unit to the van we decide check out the "new arrivals" section. These were not here last time, their doors are still closed, and they have not yet been thoroughly ravaged. We unearth this treasure. The swivel mechanisms are not rusted completely to the frame AND attached to them are really nice comfy driver and navigator seats. I know we were planning on a 60/40 split bench seat, but that's been harder to come by than we thought. Matt tells me the S.M.'s at Fleet Farm aren't nearly as sturdy as these. 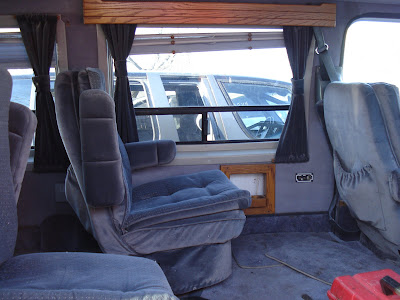 We leave this yard 3 hours later with 3 light fixtures, 2 captains chairs, 3 swivel mechanisms, and a kitchen for $200.00.

Since we're still looking for 3 bucket seats from an Astro van, it's off to "Gibby's". The mother of all bone yards. I'm giddy with anticipation. Matt tries to explain that this will be a much different experience. There are rules here, waivers to sign, bigger selection does not always mean better selection... He's right, there is no cat snoozing peacefully in the front office, there are menacing signs warning of "tool box inspection" and "No admittance", There are lots of people here wandering through aisle upon aisle of cars that reminded me of a turkey carcass picked clean after Thanksgiving dinner.

We find nothing in the way of seats, but do come across a utility truck with some interesting locking side panel doors that might come in handy for under bus storage. It is getting late and since Matt had pared down his toolbox to the bare necessities and left the the power screwdriver back in the van he decides to get them at another time. I am happy to leave there. He is right, bigger is not always better. While we are walking out, we discuss (I talk) of how we (I) would run a salvage yard if we (I) had one.

Matt had called another salvage yard a few weeks ago to see if they had any seats. "Scotty" had called back to say they had them but the price tag was quite a bit more than I was willing to fork out. I was confident we could find them elsewhere cheaper so I didn't return their call. We needed to drive by on the return trip anyway so we decided to pay them a visit. My confidence was failing after we turned up nothing in a whole day of hunting and I was now willing to part with a little more cash for the seats.

It was 3:30 when we pulled in. We were met in the office by the owner, a young guy, who was apparently working with a bare bones crew in the shop due to the holiday. When we explained what we were looking for, a light bulb of recognition could be seen in his eyes. He remembered the request and the fact that we had not called back. This set him off in a tirade about John Q. Public being rude and cheap how we could not expect anything to be done at this time of day. Now, if we were one of his buddies it would be different. Do we think he's gonna drop everything to help a guy who spend a couple hundred bucks a year here or the shop owner who doesn't give him crap about what he's charging....blah, blah, blah. YIKES, High prices, bad customer service... I think he failed The Customer Is Always Right 101. Or maybe he was just coming to from a Tryptophan induced coma. We high tailed it out of there with no seats.

Somehow we had overlooked what was right underneath our noses, the local yard only a few miles from our house. Although Matt hadn't remembered ever seeing any vans there, he was wrong. They had 4. We were escorted to and disappointed by the first 3. It wasn't looking promising until #4. There they were, 3 seats, in great condition, same color as the ones we already had. I said out loud, "We've been to 3 junk yards today and haven't found anything this nice." Matt slowly turned to me with a look of disappointment in his eyes. "Salvage yards, Kari" and then to the young boy who had been summoned as our guide, "I'm trying to teach her."

Will I ever be proficient in Salvage Yard Etiquette?

This posting is late, jsut months behind when original posting. But I only have a two part question. have you LEARNED the correct wordage to the junk/salvage yard or have you been in no need to address it correctly since not neeing to go... Oh, I shall read on to more outdated posts to see if I get my answer :)