Changing of the Guard

Tomorrow the two older kids will be trading "chore zones".

The soon to be 15 year old boy has been in charge of the kitchen for 3 years, and the 16 year old girl has had the bathroom and living room in her care for the same amount of time.

The deal was, when you "get it" and do everything without being reminded (and do it well) you will be set in charge of training your replacement. I must say Boy was ready last year, but Girl still needs a little work.

Boy now is outraged when he enters the kitchen to see a single un-rinsed glass of milk on the previously cleared counter, crumbs left over from a late night snack or garbage spilling out of the trash. His appetite is directly connected to his commitment to a clean kitchen... "No, let's not have tacos tonight Mom, too messy." or " Yeah, burgers on the grill!" But he is a teenager. Some nights he'd agree upon a 7 course meal regardless of the work involved.

I'd say he gets it. He owns that kitchen.

Girl does not yet own her zones, but the change will be necessary once the soccer season starts. She is the only child in the house not on any team this summer. She will be needed to clean up after supper while the rest of us make a mad dash for the park(s).

We have a chore system. It works fairly well but tomorrow, I'm going to try something different with the 2 traders. They need to learn to think about what needs to be done, not just do what they're told to do. THEY are going to walk through their new zones and decide what needs to be done and how often they need to do it. I will let the previous zone owner give suggestions and Matt and I will, of course, require a certain amount of cleanliness but ultimately, they are making the choices and have to deal with the ramifications of a poorly maintained area. I'm hoping this will help them own their zones in sooner than 3 years.

If you had cleaning supplies listed on your gift registers for them, make sure you make the change.

I guess they'll have to make new signs as well. 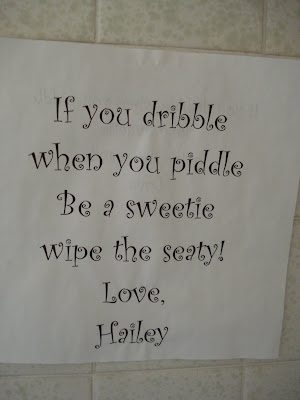 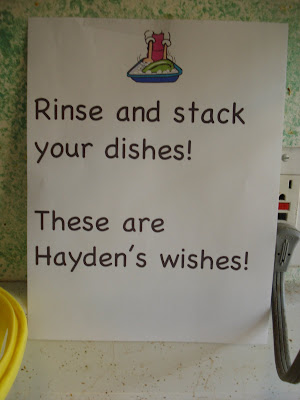 sounds about like what I am starting with my preteens. I cant wait until they own their areas. As of now, everything gets half done with lots time spent on trying to make it look like something was done without actually doing anything!

My oldest can now unload the dishwasher. H and W's other job (not counting picking up after themselves) is bringing up ALL my clean laundry and putting it in a pile on the living room floor so I can take care of it. I can't wait for the day they do bathrooms and own it!
Anna

making sure implementation and folowing through is still a tough one for me....maybe this summer :(