We play this game at our house called "who would win" It's spontaneous and ongoing. Right now we're in a debate. Who would win? Darth Vader or Megatron? They're both bad guys which makes it difficult. Usually I can pull up enough character flaws on a bad guy to make him lose if he's up against a good guy. My argument on this case is hands down Megatron just because of his size. The kids argue that Darth Vader has the force. My comeback is that "the force" is not undefeatable because eventually it's penetrable because of some weakness in the character. As far as I know, the only weak spot on Megatron is that spot on his chest. I've only

seen the movie twice though so I could be wrong....what do you think?

Well this morning we had an interesting one between my 10 and 6 year old boys. Who would win? Mr. Demme or Bowser?

They concluded if Mr. Demme got a point for each missed math question he posed to Bowser, he'd win by a knockout.

Intelligence beats raw power. There is hope for my boys.

Plus, look how tough he is standing right next to this dinosaur. He doesn't even look afraid. 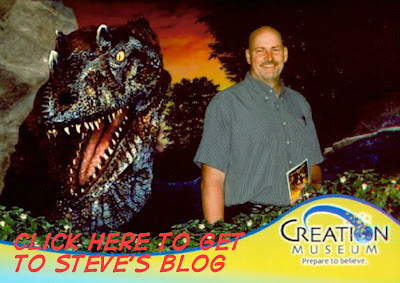 Penned by Kari approximately 9:37 AM
Email ThisBlogThis!Share to TwitterShare to FacebookShare to Pinterest
Labels: kids

I think Steve would win versus Bowser. And personally I think he could also beat Darth Vader though I will admit a personal bias :-)

Ya, well I don't hvae a clue, so that means I win right?