Of Boxes and Bookshelves

Not much being done on the bus as of late. But, inside the house, it's a different story.

Getting ready for Christmas for some means taking out boxes of decorations that were neatly packed away for a year, deciding on the perfect tree and finding a spot for it amongst the other ornamentation.

For us, this year, motivated by my daughter's gentle prompting, we are cleaning out the back room. Being the oldest and the only girl should have some perks. One of them, we promised her last year, was the other bedroom downstairs instead of upstairs with all the boys. After being patient for about a year, she finally put her foot down and I could no longer wiggle out from underneath it.

Mostly it was boxes. Boxes of books that I packed away last year when I was trying to make room on my bookshelves for the new boxes of books I was going to receive in the mail. Matt had promised me bookshelves last February and he's almost done with them. That was the hold up. I convinced him to at least get them up and functional. (which seems to be a trend here) They are not sanded, stained or attached to the wall, but they are happily filled with books. 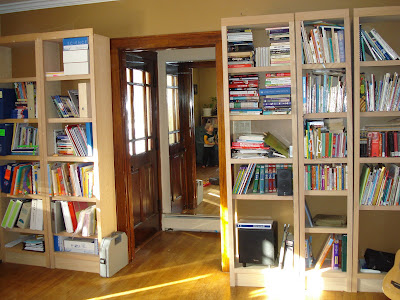 The books that didn't make it to the shelves have been separated into Sell (5 boxes) and Donate (1 box). What's left in the room is overwhelming. There's a reason it was stuffed back there. Too good to throw (plus, I might need it someday) but I don't know where to put it. It was hard enough making the decision of which books to keep and which ones to let go. I'll deal with it in little chunks. It'll get done, but I don't know if it'll be before Christmas.

Here is another bookshelf in the dining room which I reorganized to fit "The Books of Knowledge" onto. When we found them in my Grandma's attic, my son, full of wonder exclaimed, "Great Grandma has the Books of KNOWLEDGE!" There was a sense of awe in his voice and in his eyes I could see the gears turning. With this kind of resource at his fingertips there's no telling what heights he could achieve. He's that kind of kid. 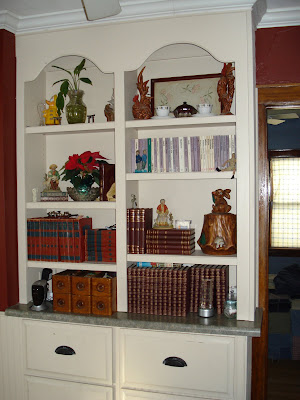 Notice I had help with the decorating.

There's a spot for the PSP...
a pretty plastic box with 2 batteries...
and of course a shrine to Steve Irwin...
Sigh. 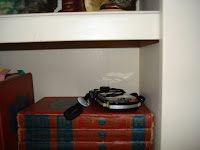 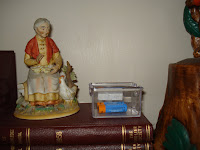 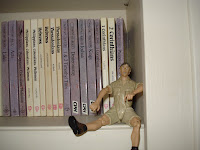 Penned by Kari approximately 10:36 AM
Email ThisBlogThis!Share to TwitterShare to FacebookShare to Pinterest
Labels: Home Organization, whatnot