When I was a kid, Driver's Ed was a class at school. Your Sophomore year, they just scheduled it... You sat in the class with everyone else who just turned 15 1/2 (or would in the next 9 weeks) and studied the handbook, watched movies about drunk drivers and most likely, learned about the rules of the road.

In our city, things are not so. Maybe they had to cut out Driver's Ed to make room for more important classes like...Metal Shop, Interpretive Dance, or Remedial English and Math. I'm not saying these things are not important, I'm just saying that "normal" in our society says that 16 year olds will drive.

I know a driver's license is not required and that not everyone gets one. But it is a rite of passage. It is a cultural norm. And while I don't always like (and often speak against) cultural norms, this is one we have chosen to participate in. Am I hypocritical? I don't think so. This will benefit our family. Having another driver in the house will be useful. I guess I'm just angry that I can't teach it myself.

Were was I? Oh yeah, Driver's Ed as a separate, private, expensive institution.

She completed her Drivers Ed course 8 months ago with a thorough knowledge of the laws of driving plus a bonus education in Cheating, Stealing and How To Hide Crack In You Deodorant Bottle. Really great group of kids...their parents should be proud. Oh, and the teacher, he was a doosy himself. Money well spent.

But as it turns out, my 16 year old daughter does not like to drive.

Behind the wheel, she's not confident. In town she does okay, but is in no hurry to take her driving test and get her license.

Last night it was cold, windy and rainy. Perfect experience for a driver-in-training to take a spin on the highway for the first time. We had to travel about 30 miles south for a get-together with friends and I decided she would drive. As long as we would be in town we wanted to find the Pottery Barn store and check it out too, so we left a little early. She did great on the highway only glaring at me once or twice with instructions that I not *yell at her while she is driving.

*It's all subjective, yelling is. I would have called it instruction with an urgent tone.

The boys were all tightly buckled and I clutched the "Jesus handle" the entire way. She experienced windshield wiper usage, learned the meaning of the word "intermittent", discovered the headlights, adjusted her steering to wind sheers under overpasses, managed heavy traffic, handled merging situations, and maneuvered the mall traffic all with great success and confidence. Until we encountered an unbelievable scenario in an intersection the was under construction.

The road we were to be crossing was being expanded from a 2 lane highway to a 6 lane thoroughfare. The far 3 lanes were not yet open and traffic was routed to the 2 lanes directly in front of us. As we waited, first in line, at our red light a huge barricade proceeded to blow forward, sand bags and all, from the far lane on the right and turn perfectly like it was on a hinge to show us it's "ROAD CLOSED" warning. So animated, like it was supposed to do just that at just that time. 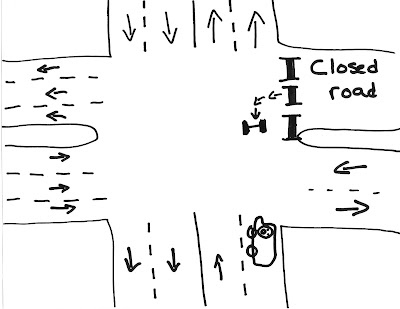 I glanced at Hailey's astonished expression as I surveyed the traffic in the lane next to us, she had NO clue what to do and there were cars behind us and next to us as far back as we could see. In her eyes the option of waiting until the oncoming lanes were clear and averting the sign as an experienced driver would do was out, crying and melting into a puddle sounded good.

Me, quick thinking due to the coffee I had ingested earlier, coached her on the whereabouts of the hazard lights and gave calm instruction on the plan formulating in my head.

"When the light turns green, put on your hazards and pull forward to the barricade. Hayden and I will jump out and push the sign back where it belongs. We'll hop back in and be on our way." She had a few moments to process the information. A glance back to Hayden told me he was in agreement. Someone would have to do it, there was no way anyone could get through otherwise.

Initially, the plan worked perfectly. The barricade was heavier than either of us expected and the wind was gusting making the goings very difficult. Hailey pulled ahead as soon as she could get by and Hayden and I jumped back in and we continued our journey. As I was commending her on her calm execution of the plan she stated excitedly that the light had turned red and everyone was honking at her to get out of the way. That's the only reason she did it.

Man, didn't anyone SEE what we were doing? It was so windy we didn't even HEAR any honking when we were outside.

She pulled into the next parking lot and told me she was d-o-n-e driving.

Hayden thought it would've been appropriate for certain gestures to be waved in that situation. I assured him, and I have a feeling that this might become something I have to say again in the future, "It is never alright to flip someone off. Not even on the inside."

His sense of justice was wounded. Since when is a good deed rewarded with seething impatience? Is everyone so preoccupied with what's in front of their noses that they fail to notice the roadblock ahead?

P.S. We never found Pottery Barn, the party was wonderful and I drove home.
Penned by Kari approximately 4:33 PM
Email ThisBlogThis!Share to TwitterShare to FacebookShare to Pinterest
Labels: kids

Kari, it was so nice to meet you in person last night! Thanks for introducing yourself :)

I too have a daughter who's a hesitant driver. We haven't taken her for her license yet because we don't think she's ready. Our first two were not like that...they were raring to go. But everybody's different.