Last August I traveled (alone) to Oregon to visit a dear friend and her family who were temporarily living there as a result of her husbands job.

I had never been away from my kids save the occasional sleepover.
6 days I'd be gone and an airplane would be involved.
I had sold a major chunk of my homeschooling materials to help finance the trip.
It was quite an adventure.

I had every intention of journaling the whole trip, but I only really captured the first day in words. Well, not even the whole first day, just the flight. The rest is just pictures and memories. Over the next few weeks (because I must not have enough to do between school planning, school, football and volleyball practices, painting the rest of the house, and keeping up with my regular household routine) I plan to get at least some of the memories in writing.


This was Day 1. Word for word as I captured the events in my journal.

A small, slow, old Hispanic woman with a child in tow, the last to board the flight leaving just before mine, left her purse at security.

She spoke no English and all of her identification was in the bag.

Her airplane was already being “pushed out” of the gate. The airport employee at the counter tried to stop the plane by calling but was unsuccessful. “Call the tower!” I heard over the walkie-talkie. “The plane appears to be stopped.” she responds as she dons a reflective vest and runs from the terminal, purse in hand.

From my seat inside I see her appear on the tarmac. The pilot sticks his whole body out of the little window of the cock pit poised to catch the handbag.

Inside, people are watching, wondering if she’ll make a good throw.

Heave...He catches it on the first attempt. As the ticket lady returns to the terminal applause erupts.

A good deed not gone unnoticed. What a lovely way to start my adventure. I wish I had gotten a shot of that.

7:55 a.m. Minneapolis Airport
Well, that was a bumpy flight. Cool though. 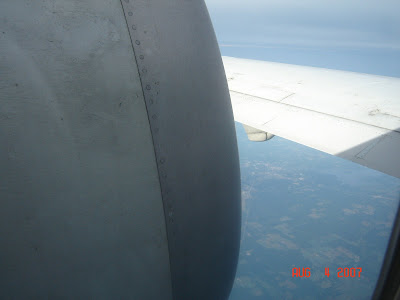 9:30 am
I just walked around the whole airport- You can buy iPods from vending machines. They have TWO starbucks and all kinds of other shops. 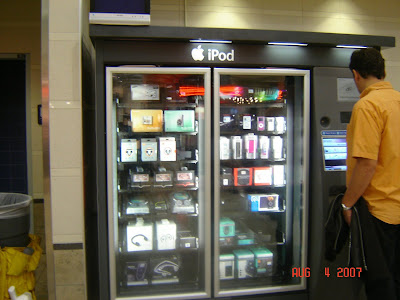 I walked/rode on the moving walkway just cuz I could.

I think Concourse F is the hottest and stinkiest place in the whole airport. That’s where I will take off from.

10:30 am
Oh My Gosh! Airforce One is here! President Blush landed to look at the bridge collapse. I saw lots of helicopters and military when we landed but - hey, this IS an airport. 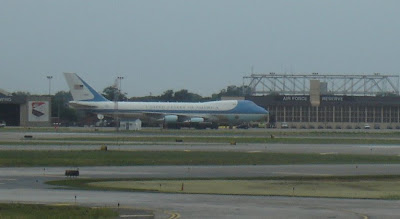 I betcha HE smells good.

11:51 am
Our plane was supposed to take off at 11:25- we’re still parked. The President has delayed our flight (everyone’s actually) It’ll probably be about 30-40 more minutes the pilot says.

12:37 pm
We were next in line for takeoff when the pilot detected a mechanical error. Something about attitude. We’re on our way back to the gate to fix the plane.

The lady behind me is threatening to walk home. I say let her. She’s complaining about everything.

The lady in front of me just put her seat back.

There are 2 babies that I can hear. I hope they are okay. I’d hate to be their parents right now.

The mechanic was not waiting for us at the gate

Mechanic in - part in and checked, paper work done!

YEAH the new shift has arrived, there is someone to push us back. We taxi to the runway.

There is a discrepancy on the passenger list, we must wait some more.

I can’t turn on my “electrical device” to see what time it is.

The father of the baby sitting somewhere behind me has invited those annoyed by his infant to talk to the pilot. The baby is doing wonderful in my opinion. It was probably Miss Crabby Pants behind me. He has also offered the job of holding his son to any volunteer.

It’s still raining, I’m feeling warm and a little claustrophobic. At least the people in from of me have their seats in the upright position.

I dropped my pencil.

The pilot was right, there was something wrong with the attitude.

2:18 pm
We’re in the air. “Beverages are complimentary on this flight.” The Flight attendant says. “Turn to page 127 of your WORLD TRAVELER magazine and have your selection ready when we come to you.”

My pages are ripped out - AND - my copy is old. The girl next to me shares hers. She’s also skinny enough to bend down to reach my pencil.

I wonder what those arrows mean on the wing? I know, really, but it’s fun to think about. 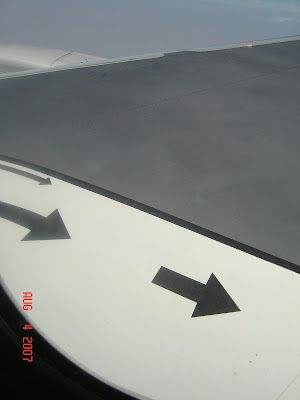 5:24 pm Portland, Oregon
I’m here. The flight attendant apologized for the 2.5 hour delay and says, “ I wish WE could blame it all on the President.”

Penned by Kari approximately 5:48 AM
Email ThisBlogThis!Share to TwitterShare to FacebookShare to Pinterest
Labels: The Past

what a wonderful start to your adventure! I can not wait to hear more.