The Coast, the Awning, and the Shelves 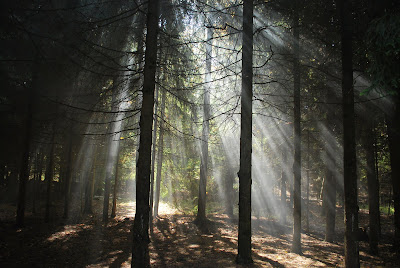 A few cold weekends ago we hauled ourselves out camping. We put our heaters to the test. We're still using the electric heaters (we still need shore power to run them) but Matt is in the process of devising a way to heat the bus with a boiler and hot water heat fueled by propane. That way, we don't have to "fight" for the only electric site left in the campground.
The sun was shining, but it was frigid. Away from the fire it was too cold (for me anyway) to wander far. I've since purchased long underwear and have been much more comfortable on subsequent outings.

We hiked on the sunny road rather than wander onto the paths and explored the beach with our eyes instead of setting foot on the sand or near the water. Definitely a place to visit next summer. Interestingly, while we were freezing our tushies off, a tent camper in the site next to us...a camping person in a tent, I just thought I'd clarify...was camping in a tent. Jokingly I commented when we pulled in, seeing the window flaps of the tent open, if it was too warm in there for him.

We set up camp. The boys did the outside work (awning, shelves, firewood...) while Hailey and I started supper (white chili in the crockpot) and transformed the bus from travel mode to we're-probably-going-to-be-spending-a-lot-of-time-inside mode. Making beds, turning seats, making sure everything was stowed where it belonged so not too much would be in the way. Once we fit 7 people in, milling about, it seems a little claustrophobic. Traveling or in our beds it seems roomy, but when neither of those are happening, there's a lot of bumping into each other, climbing over shoes, wondering where to hang your jackets, hats and mittens kinda stuff going on. 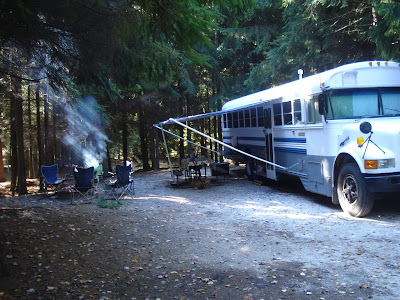 After our hike we settled around the fire, still speculating the purpose of the site next door with a vehicle, and a seemingly personless, opened windowed tent.

As the darkness fell we were able to see a light shining on the other side of the tent and occasionally, the shadow of a person wandering around, ever so briefly, inside. Surely as the night wore on and the temperatures dropped the owner would zip up and hunker down for the night.

On one trip to the bathroom (unheated. YIKES) we discovered the light was a heat lamp anchored to a tree limb just outside the tent. This person was watching birds. The occasional shadows we witnessed must have been to restock the feed under the lamp. Dedicated, I must say. I don't know how she (we later found out she was a she and not a he) stayed warm or what she was doing inside the tent alone and out of site of the windows (which was just a tiny space) the entire weekend but I'm in awe of her ability to remain quiet (never a peep) and warm.

In the morning it was 33 degrees outside. Inside the bus, with both heaters blasting it was 66. Very nice. Our neighbor's tent was still open and the birds were having a feast.

After breakfast Matt and I sat outside, very close to the fire, while we let the kids play on their electronic gadgets inside. The birds were fantastic to watch. Cardinals, blue jays, chick a dees, and squirrels aplenty. It never rose above 38 degrees while we were there. We left when our firewood ran out. 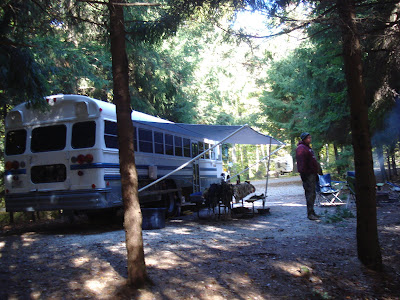 I had mentioned previously that Matt and I were in a disagreement concerning the awning. He wanted one, I did not. He graciously agreed to make a prototype as cheaply as possible and we'd test it out. If it was too fussy or stress inducing, we'd can it...but if it proved successful, we'd keep it and talk of sturdier materials.

A tarp, PVC pipe, cables, bolts and pins make up this awning. It works well and I'm sure, when the time comes for us to need shade it will serve it's purpose. The pipes are connected to the bus with removable bolts and the tarp attaches to the top with pins. The cables running from the bus to the outer pole keep it from sagging (like it did on Labor Day weekend). Much nicer this way, don't you agree? The support in the middle is weighted down by a cement filled rim. Although it's not beautiful, it's the perfect size and weight. I've been trying to think of a way to make it look less utilitarian...but I'm at a loss. 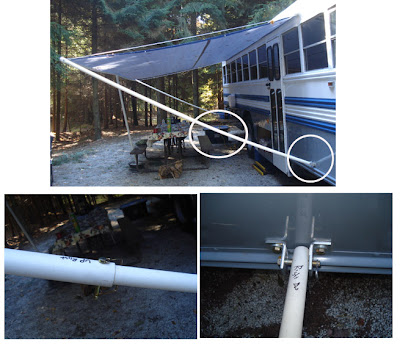 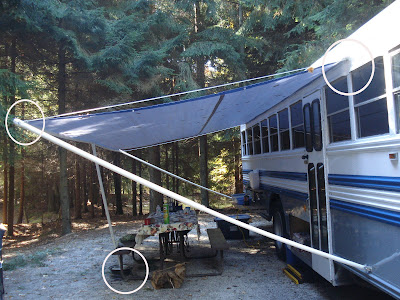 The side and middle support poles consist of two poles, one slightly smaller than the other so that the one slides inside the other for storage and extra rigidity while in use. The "seams" of the side poles are secured with a pin while the middle support pole can "float". I'll tell you why when I post about our last camping trip. 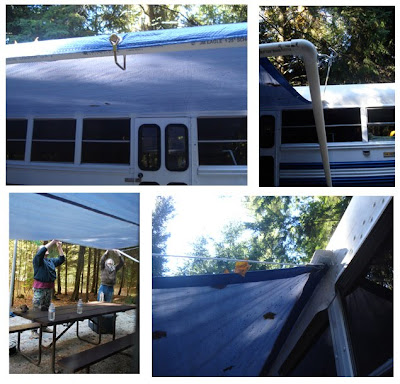 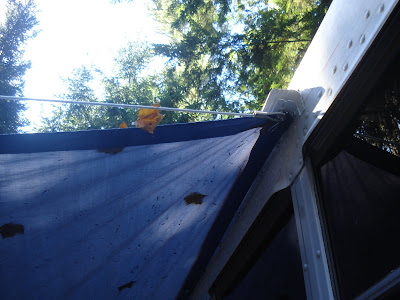 The point at which the tarp attaches to the bus deserves some attention. Matt bolted angle iron right above the windows, but sandwiched between that and the bus is a piece of plastic gutter installed to keep the rain from dripping through the gap. I tell ya, that husband of mine thinks of everything. Sometimes I'm glad he's the one that does the designing and not me. There are other things that he does though, that totally baffle me. We are like night and day with our ideas 75% of the time. But it works for us...what more can I say.

Please excuse the typo in this next photograph, I caught it too late and there is no way I can fix it. It should read "constructed" 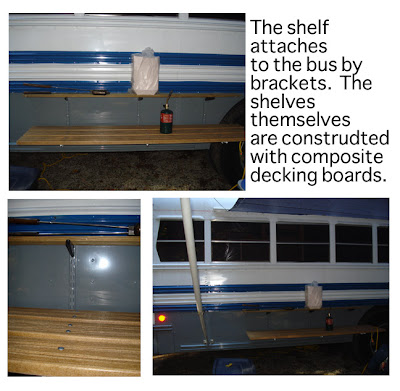 It was too cold on this trip to use the outside shelves for their normal functions...doing dishes, preparing food, and as a storage place for silverware, plates, tequila and margarita mix. I thought it would be the perfect time to get some close ups of it.

The awning poles, for now, are stowed in the hallway leading through the bunk room and the shelf is stored on the lower bunk for traveling. Eventually, we will have more storage under the bus for them.

But like everything, it takes (extra) time and (extra) money, both of which are a rarity these days.
Penned by Kari approximately 6:23 AM
Email ThisBlogThis!Share to TwitterShare to FacebookShare to Pinterest
Labels: Bus

what a wonderful post. I enjoyed the photos and discriptions very much.

I really enjoy reading about the adventures, trials, and joys of your bus. Thanks for a great start to my day!