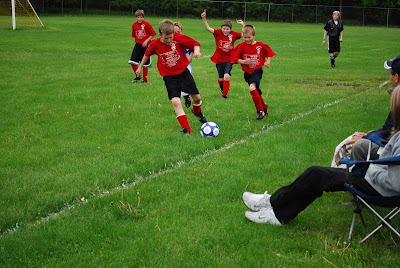 Our summer soccer league has started. We've got a week under our belt and it feels just right.

The 4 boys all play 2 nights a week. Hailey hasn't played since 5th grade and that's okay with me, there is a lot of screaming at girl's games.

I love that it's what we do on summer evenings. The hardest part for me to get used to is getting everyone fed before we leave. Inevitably, no matter how much I plan, someone ends up needing/wanting to eat after we arrive home. I try, at all cost, to avoid that many meals in one day... so this year, I'm packing snacks, or will pack snacks once I get that organized. Healthy, cheap snacks like trail mix, popcorn, and carrots. I'd rather have them eat those at the park than dirty dishes at home and make me feel like I've got to plan for 4 meals a day, I don't meal plan well.

As it is, Matt joins us after work by calling my cell phone and asking "Where do I need to be?" Or like last night "I'm done, come and get me." He's hungry and needs nourishment as well.

But this post is not supposed to be about food, it's about soccer.

So anyway, the second hardest aspect about 8 soccer games in 4 days (not evenly distributed at 2 per night) is transportation. The 3 younger boys play on set nights, 2 on Monday/Wednesday and the other on Tuesday/Thursday this year, but in Hayden's age bracket their games are not scheduled for specific or consistent nights of the week. While the younger 2 play at the same parks each week (not both of them at the same park, but each separate boy at separate parks) the older 2 travel. Granted, the Green Bay area is not huge, but it can be a haul across town when there are time constraints. And high gas prices. It should help that Hailey can drive, but with only 2 of 4 of our vehicles working at the moment, having a 3rd driver isn't all it's cracked up to be.

I live love to plan, but even this gets tough. Like last night. Although we only had 2 games, one at 5:30 and one at 7, they were across town from each other and the 5:30 team had pictures scheduled for after, Matt was working late and my parents were out of town.

I ran several scenarios, and plan E (with visual) seemed to be perfect. 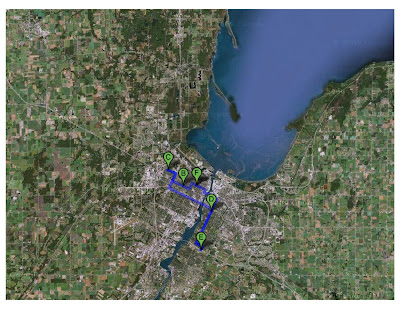 F-B 4:55-Me and the boys leave home (fed) to pick up Hailey from work in vehicle 1 (to be further noted as V1 for simplicity)

D-C Me, Sam and Isaac take Matt's van (to be further noted as V2 for simplicity) back to G1.
:::simultaneously:::
D-E Hailey and Hayden drive V1 to G2 (can you guess). On the way, stop at Mc D's for Hailey's supper.

C-E After G1 and pictures, me and 3 youngest head across town in V2 to G2.

E-D/D-E (round trip) Matt calls after work and someone picks him up from work to enjoy the last moments of G2. (V1 or V2. At this point it doesn't matter)

Hard to believe that's easier than meal planning for me isn't it?

Anyway, this is post is not supposed to be about transportation, but about soccer.

While I still had Hailey (our newly appointed family photographer) at the G1 I had her document the scene.

It's been a very wet/cold season so far, but it does keep things fun and exciting. I mean, what boy doesn't love to play center forward AND play in the water at the same time!?!?!?!

Here's Griffin with the opening kick off. 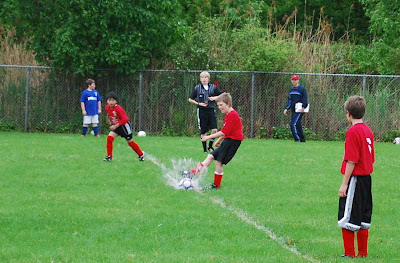 Another nice size puddle on the sideline. 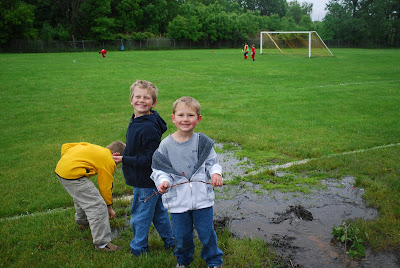 Fishing in the sandbox. 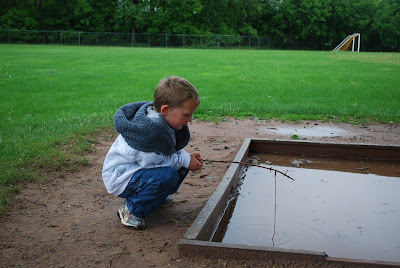 Even when in the middle of V1/D-C Hailey calls me to tell me they have completed V2/D-E and upon arrival have been told by the Ground's Keeper that G2 (and all G's at that loation) have been canceled due to poor field conditions. (Wow, worse than G!?)

and everyone wanted to eat again when they got home.

*UHLK^%&KDJK(%^!!!!!!!!!!!!!
Penned by Kari approximately 6:44 AM
Email ThisBlogThis!Share to TwitterShare to FacebookShare to Pinterest
Labels: kids

If that's not the truth.
Azure