I have collected the data, constructed a hypothesis, tested, analyzed the data, and am now reporting my results.

4 out of 5 children will become picky eaters in 1st grade.

Probably 5 out of 5 but I still have one who isn't of age.

10 years ago when Hailey, my oldest, was in 1st grade I noticed her being very particular about what she deemed acceptable at the dinner table. Things we had always eaten were suddenly unpalatable. With a Kindergartner and a 1 year old at the table as well, and being in the season of parenthood where developmental milestones for each child changed rapidly, we were used to adapting quickly and moving on.

Not immediately, but 1 year later when Hayden entered 1st grade, the same thing happened with him. Still thinking it may be a imitative response, we adjusted and moved on. Our menu was becoming quite restrictive. No more could I slap pork chops and sauerkraut on the table and expect that I would be applauded. Pork chops and ketchup...maybe.

5 years later, enter Griffin, a 1st grader. With 2 more babies younger than him and the beginning of our homeschooling journey underway, I had more to think about than the hypothesis I had formulated. It seemed like ages ago.

When something happens once...OK. Twice...coincidence? Three times...there has got to be something behind this. My first thought was "school". Griffin had attended Pre-school and Kindergarten, and the big kids had years of it under their belts before we started homeschooling, it MUST be related. Maybe it was their newly formed independence, being away from home all day and being introduced (via other's brown bags) to more "exciting" foods, or maybe it was the increased amount of responsibility placed upon them that made them yearn for more control in their lives. Whatever it was, it was annoying. And once again, we adjusted and moved on. By now, telling the offended party that "If you can't smell it, you can't taste it, so plug your nose and have a few bites. Then you're welcome to make yourself a peanut butter sandwich."

I was on a mission to find out whether this was a social issue or a developmental phase. I was hoping for the former... With 2 more boys yet to enter 1st grade and my menu options already dwindling, I was dreaming of sidestepping the obstacles I had encountered in the past. 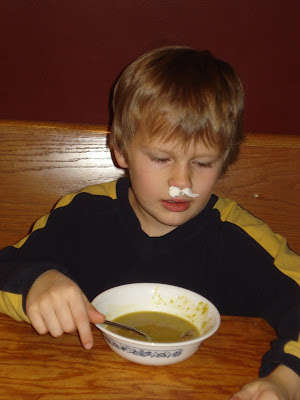 Pass the peanut butter.
Penned by Kari approximately 7:55 AM
Email ThisBlogThis!Share to TwitterShare to FacebookShare to Pinterest
Labels: kids

My oldest attended a preschool where I taught. During lunch times, she learned that all the vegetables she loved were weird and yucky. She was 4. My other kids pretty much followed suit and determined that they didn't like certain foods (spaghetti?) around 4 also. Maybe each family has a gene that determines when they become fussy eaters.

I no longer offer them alternatives to foods they don't like. They don't have to eat, but they will be hungry until the next meal. Most of the kids will eat anything now. Even my new four year old! :)

Your photo made me laugh so hard I nearly wet myself. We have "picky" eaters here... don't like tomatoes? well, you eat katsup, try another excuse. Don't like mushrooms? You just ate all but one out of your bowl of spagetti, find another excuse. You don't wanna touch your dinner? GO TO BED! Although, the other day we got a bucket of "bouya" it was soooooooo gross Jeremy and I could not eat it for supper (we had both tried it in our excitement earlier in the day). So, for dinner, I gave each child a ladel full and told them to eat it and if they were still hungry they could have another scoop or a pbj. They ate it an told me it was really good. NONE of them had a pbj that night. Funny stuff. I am like you though, if they make a good effort we let the rest slide... but don't tell me you're still hungry.

In our family the magic age is apparently 4. My mom had always assumed that I "learned" to be picky from my younger brother (who was born picky, but he's adopted so this doesn't change the theory)who is 4 yrs younger than me. She said I ate almost everything (except a few things like cake & jello which, who cares!) until I was 4 and then it was as if I saw my brother not having to eat stuff he didn't like & I realized I could be picky too. Which sounds good in theory until . . . 27 yrs later when my twins who didn't HAVE a younger sibling, turned 4 and BOTH went from eating everything to being quite picky. So apparently our genes create pickiness at age 4. Baby #3 is due in April, check w/ me in 4 years to find out if the theory holds true LOL.