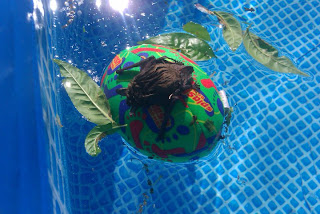 And this is what we found in the pool today!  We thought he was dead (like all the other bats we've found there) but upon closer inspection, we noticed he was shivering.  We scooped him out with the skimmer and put him in the shed to do whatever-it-is-that-bats-need-to-do-after-spending-a-night-clinging-to-a-flotation-device.

He reminded me of Rose from the movie Titanic.  I was going to post a YouTube video of the movie scene, but I cried so much watching them that I decided to watch the movie instead.  It's been that kind of week.

Within an hour he had dried off, warmed up and left.  At least I hope he left, just to be safe, I'm not going in the shed for a few days.
Penned by Kari approximately 3:51 PM
Email ThisBlogThis!Share to TwitterShare to FacebookShare to Pinterest

aww, I am so happy you saved him.