It's Hard, That's For Sure. 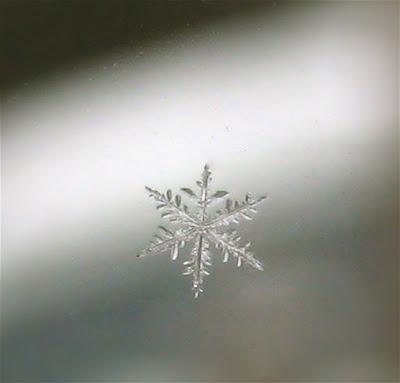 Did you ever have a series of events happen in such rapid succession that you hardly had time to recover from one before the next one hit?

It makes the time fly, that's for sure.

Hailey took this picture of a snowflake during our previous cold snap. I say previous because, after a short reprieve, we're back below zero.

It makes it hard to want to work on the bus, that's for sure.

My Grandma died last week. My Grandpa had passed away a few years ago so, for now, their house stands empty. We stayed there for a few days after she died and it was very comforting to be there. She left notes around the house...attached to newspaper clippings, written on the bottom of the banks she kept for us Grandchildren, neatly clipped together writings about her feelings, reminders jotted and hung on the refrigerator...

Bundles of Reader's Digest dating way back to the sixties are still perched on the basement shelves. The drawers are still organized the same way, I knew exactly where to find string, twist ties and scissors. If Grandpa were still alive, I'm sure there would be Double Mint gum in the drawer just right of the kitchen sink.

My Grandma always let me eat as many slices of toast as I wanted and had Spaghetti O's in the cupboard for lunch. I have her secret chocolate chip recipe, but I never learned how to make tomato jelly.

I buy Listerine because it reminds me of Grandpa and whenever I see a caraway seed, I can hear his voice.

His voice was loud and beautifully baritone. He's using it now to sing love songs to his Bride, who's finally reunited with him in Heaven.

It's hard to let go, that's for sure.
Penned by Kari approximately 5:36 AM
Email ThisBlogThis!Share to TwitterShare to FacebookShare to Pinterest
Labels: whatnot

The snowflake is beautiful and so is your post.

Cool picture!
I am so sorry about the loss of your grandparents.

well that snowflake is pretty and i'm sorry about your grandparents but most of us know where they are.

Parker
Ps I don't like listerine especially the mint kind

Knowing your grandmother got to see her Lord and her sweet heart! Happy day! Haileys photos is amazing. I want to save it to my computer. Is that okay?