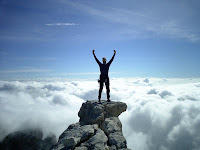 Nubain can only be given once every two hours.  I had a half an hour to go.

The feeling of being split in two was hitting me like a jack-hammer again but as the nurse checked me and said I was at 4ish I began to focus on my breathing and what has gotten me through most of my other labors.

It's a little trick I learned before Griffin was born and has always been useful to me.

Picture, if you will, a contraction as a line on a graph.  As the line rises the pain increases, and each contraction is like a mountain.  While in the valley, you are pain free.  On the way up the mountain the pain increases, but is usually tolerable... up to a point... the peak.  Only as you reach the summit does the contraction feel all consuming.  The second you start the descent, the torturous feeling gives way to cramping, the cramping lessens to aching and then, when you reach the valley, you can once again relax.

The trick is to convince yourself that, during this whole "mountaineering" process, only the few seconds at the pinnacle hurt.  The rest can be labeled "increasingly uncomfortable" or "steadily decreasing on the pain scale".  So actually, even when your contractions are lasting 1.5 minutes and they are 3 minutes apart, only a fraction of that is excruciating, the rest is a piece of cake!

On the fetal monitoring machine there is also a number associated with where on the mountain you are currently.  Matt's job has always been to watch that number and tell me the instant it decreases.  I don't think he understood why that was important to me.  Either I never explained it to him, or he wasn't listening when I gave that particular instruction, (or maybe he didn't care one iota about me and was actually in cahoots with that evil nurse)  because he was saying things like

"Well, that was a biggie" and

"whoa, it keeps going up"

or holding out on telling me when the number went down because he was waiting to see if it would go back up,

instead of just saying "it's going down"  which was all I wanted to hear.

There was no time to explain it now.  If I could just make it to 9:30 pm, I could have another shot of Nubain and all would be well with the world.

As I watched the hands on the clock move in slow motion, I, in my most convincing tone, requested, ever so sweetly, that the nurse have the drugs ready to administer immediately as the second hand reached the appropriate location.  I saw her go through the motions, but I don't think she ever went through with it.  (and I think I saw her head spin around)

I waited for that euphoric sensation, the giggling... the relief never came...
Penned by Kari approximately 5:45 AM
Email ThisBlogThis!Share to TwitterShare to FacebookShare to Pinterest
Labels: me, pregnancy

Love it! Happy holidays to you and your readers.